Skip to main contentSkip to footer

The ultimate guide to our approach to Velocity Based Training 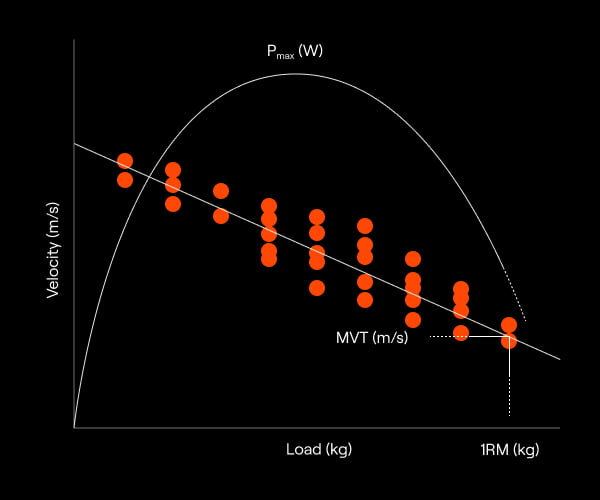 It’s not about getting faster

Velocity Based Training (VBT) is a training concept based on the almost linear relationship between the load moved and the velocity at which that load is moved. That means that the heavier the load moved and the more exhausted the athlete is, the slower he/she will move. Since you usually can’t move loads as heavy as you want, at some point you reach the point where you can’t perform the movement. The velocity at the highest load at which one can still perform the exercise is called the Minimum Velocity Threshold (MVT). This point also marks what is known as the 1 Repition Maximum (1RM). An athlete’s velocity data set across different loads performed in an exercise is typically summarized in the Load Velocity Profile (LVP) and assigned a regression plot. Often a presentation is chosen in which the power curve is also plotted.

The beauty of Enode Pro is that you don’t need to understand any of this to successfully implement VBT into your own or your organization’s training. The Enode Pro app does all the necessary calculations in the background and automatically makes training recommendations based on the LVP, which is re-evaluated after each set and can affect the training recommendation for the next set.

In practice, VBT can be implemented in strength training at different levels. Starting with a simple stopwatch that outputs a metric to beat after each repetition, to complete training planning using VBT.

It’s all a matter of intent

Leaving aside all the science and mathematics of strength training, what remains is the athlete’s will to improve. Unfortunately, strength training doesn’t provide us with much to measure whether we were better or worse than the last time we trained or 3 months ago. For this reason, an objectively recorded metric is ideal. It quickly shows the athlete how they are doing at the moment. Even if it’s just a matter of improving from one set to the next, this can be a huge motivator for athletes who don’t otherwise enjoy strength training.

The body of research in this regard is quite extensive, especially for jumps, and shows that with both visual and auditory feedback, athletes tend to jump higher than those who do not receive feedback. In addition, VBT has been shown to promote the activation of type II muscle fibers. Providing direct feedback is an easy-to-implement way to make any strength training program more effective without significantly affecting the rest of the training design.

Velocity zones are dead – once and for all

For years, VBT articles have featured the same overviews of fixed velocity zones for the specific training of certain strength traits. We would now like to explain why these make no sense in practice.

Imagine two athletes. One is 1.95 m tall, the other 1.70 m and both are equally strong. Both perform the same exercise with the same load. The taller athlete achieves an average speed of 0.55 m/s and the shorter athlete achieves an average speed of 0.45 m/s. In many places, you now read that anything less than 0.5 m/s is defined as absolute strength training and anything between 0.5 m/s and 0.75 m/s is defined as acceleration strength training. Although athletes have the same theoretical 1RM, they are training different strength abilities according to this definition. How can this be? The tall athlete has a longer distance and therefore more time to accelerate the load. This leads to higher average velocities and at the same time incomparability of fixed velocity ranges between different athletes. By the way, this is also the reason 2 exercises with different distances are not comparable.

The Enode Pro app is aware of this fact and creates individual velocity profiles in the background for each athlete and each exercise. This way, no athlete has the same velocity ranges as the other. During group training, the app automatically groups athletes by body size if desired, which can lead to fewer disc changes if the strength levels are similar. The goal of the app is always to provide the athlete with a load recommendation. Incidentally, prescribing a specific velocity may not be helpful either. If an athlete wants to, he or she can achieve the specified 0.7 m/s with an 80 kg, 90 kg or even 100 kg load, for example. Depending on the athlete’s willingness to perform, this can result in completely different stresses.

You do not know your 1RM

Having established that fixed velocity ranges should not be used in practice, the question is what can you program instead? Quite simple – percentages of your daily 1RM. This has the advantage of being understandable and easy to program for many users. The basic idea of VBT is to load the athlete optimally in every workout. The problem is that an athlete’s 1RM can vary by as much as ±18% over the course of a month. Many training systems are based on establishing the 1RM in the basic exercises at the beginning of a cycle. This then serves as the basis for all load specifications for, say, the next 8 weeks. If you now consider that the 1RM fluctuates, this can mean that on one day you train too lightly and give away potential and on another day you train too hard and need more regeneration.

That’s why Enode Pro re-evaluates the day’s 1RM after each set completed and makes adjustments to the load, repetition count and rest time parameters if necessary. Again, the app does everything important for you and all you have to do at the end is train.